We open with Dario Cueto doing some pull-ups in his prison cell. An officer comes around, and proclaims that Dario must have some friends in high places. Dario gets his personal effects from the Desk Sergeant, who’s none other than the Honky Man himself! Dario then climbs into a limo. Inside, Councilman Delgado lets Dario know that all the charges have been dropped, but they aren’t alone. A mysterious figure with a metal gauntlet lets Dario know that if he wastes any more of his time, “the next sentence is death.”. Looks like The Temple is back in business folks.

Vampiro lets us know he’s nobody’s master anymore, and we head into the ring where Dario and Matanza are eager to welcome us back to The Temple. Dario informs of us of two things. First, the main event tonight will be Rey Mysterio Jr. taking on Pentagon Dark Second, Dario has a new toy, “Dario’s Dial of Doom”. On the wheel are a bunch of names that his brother, Lucha Underground Champion Matanza, has yet to beat one on one. If your name comes up, you get the title match. So, Dario spins the wheel, and it lands on… Son of Havoc. 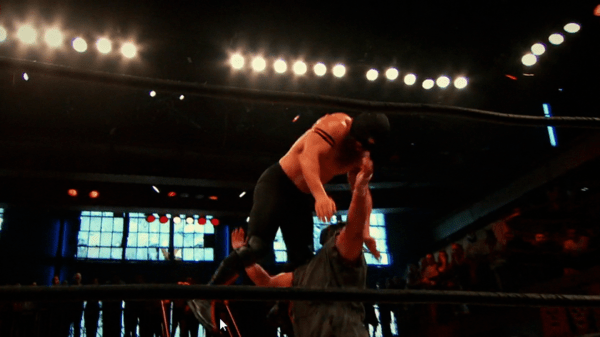 Matanza defends against Son of Havoc

Winner: Matanza via Wrath of the Gods

Welp, Lucha Underground comes out swinging with this incredible match. Son of Havoc got the fans behind him early in Lucha Underground’s run, and the crowd just can’t get enough of the guy. Matanza has been the unbeatable monster ever since he stepped into Lucha Underground last season. The two come out trading blows, but Son of Havoc manages to utilize his quickness to stay a few steps ahead of the Monster. He uses what brought him to the dance, so we get to see a lot of dives and top rope moves.

Havoc gets a fair few hope spots throughout the match. Matanza kicks out of the Shooting Star Press, and after another move from Havoc, gets caught in a Fujiwara arm bar. Havoc’s reliance on the top rope would be his downfall. He would literally leap into Matanza’s waiting arms to finish this one off. *** and 1/2 *

We cut to Dario’s office, where Worldwide Underground enters (PJ Black, Jack Evans, Johnny Mundo, and Taya). Johnny wants the Lucha Underground Title right now. Dario brings up the last time we saw him, he lost the Trios Titles. We get a flashback scene to Ultima Lucha Dos, where Worldwide Underground beat Angelico up in the parking lot, and broke his leg. Dario says that still isn’t enough to deserve the title shot. Johnny then demands a shot at the Gift of the Gods Title, but Dario refuses, saying that it doesn’t change the fact that he lost at Ultima Lucha Dos. They all did… except Taya. So Dario makes Taya versus Sexy Star for the Gift of the Gods Title tonight instead.

We go to Ivelisse in the ring. She’s still pissed at Catrina not only costing her a victory at Ultima Lucha Dos, but at the first Ultima Lucha as well. She challenges Catrina to a match at Ultima Lucha Tres, which Catrina quickly appears from the darkness, and accepts. Well now, lets see how well Lucha Underground can book this one out across the entire season.

Gift of the Gods Title Match

Commentary is quick to bring up that the Gift of the Gods Title has never been successfully defended. They both start out trading some holds, and some lucha sweeps. Taya gets to show off some of her power moves, and Sexy Star gets to fight back here and there. This encounter never really clicked for me. Sexy has a moment where she runs at the corner really lackadaisically that takes me further out of the match. Worldwide Underground comes out, and Johnny holds Sexy against the ropes. Sexy moves out of the way though, and that costs Taya the match!

Worldwide Underground do the beat down post match, but the new Trios Champions, Fenix, Aerostar, and Drago come out to make the save. Not a whole bunch going on during the match. This one was nothing more then a showcase to show off the feuds. **

We go back to Dario’s office, where Marty “The Moth” Martinez walks in. Marty says he’s glad to have him back, but Dario doesn’t want to talk about it. Marty says that’s fine, he wants to talk business. Martinez wants to conquer the Temple, but Dario says that he still has a problem with Killshot, as Marty still has his dog tags. Next week, the two will go one on one in a Weapons of Mass Destruction match. Well, that’ll be something. 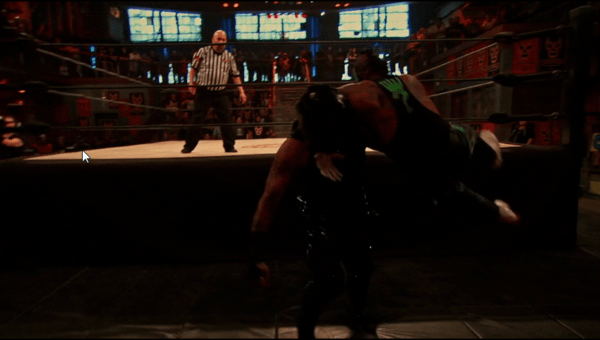 These two guys went out, and put on a terrific match. Rey looks just as smooth as he did in his matches last season, and Pentagon is just so over with the crowd, so you know the atmosphere was good. Mysterio hits a beautiful tilt-a-whirl DDT on Pentagon on the outside that gets the fans out of there seats. The match spills back inside the ring, and Pentagon hits that fold-up pump handle slam, but Rey kicks out at two. Pentagon decides it’s time to go talk some smack to Vampiro on the outside, which causes Vampiro to leave ringside. Pentagon goes back into the ring, and eats a 619. We finish it out from there.

Post match, Pentagon attacks Rey, and goes to break his arm! However, Dragon Azteca Jr. comes running so the same thing that happened to him at Ultima Lucha Dos doesn’t happen to his mentor! Kinda stinks there wasn’t more build for this, but Lucha Underground has a good track record with making matches we’ve seen before feel different every time. Rey continues to rack up the big wins too, so his path has to cross with Matanza and Dario at some point right? *** and ¼ *

We cut backstage to Prince Puma thinking about his loss to Rey Mysterio Jr. at Ultima Lucha Dos. Vampiro shows up backstage, and says he knows how he feels. He offers Puma some advice. He knows that Puma hasn’t been the same since Mil Muertes beat him back at Ultima Lucha Uno. Vampiro suggests he that beat him to get his mojo back.

And with that, we’re out.

Overall Rating: 7 out of 10 Lucha Underground has a history of putting on great first episodes so far, and this one was no different. The wrestling on here was terrific, and the story progression continues onward as it ever has. I’m more interested in Dario then ever, and the wrestling feuds are already laid out before us. Frankly, I’m so excited to have Lucha Underground back!