We open with the usual swank video package recapping events from last week, and the season so far. Dragon Azteca Jr. wants Pentagon Dark for breaking his arm, and Chavo for leading to the death of his predecessor. Johnny Mundo’s hunt for the Lucha Underground Title, and Worldwide Underground’s beef with the Trios Champions, Fenix, Drago, Aerostar and the Gift of the Gods Champion, Sexy Star. The coming war, and people taking sides, and Prince Puma needing to get his mojo back by defeating Mil Muertes.

Sexy Star is hanging out backstage in the locker room, when Dario walks up. Dario talks about The Mack injuries, and how Sexy should be afraid of Dario’s brother, Matanza, as he’s a freakin’ monster. Sexy remains adamant that she’ll never be afraid again. Dario teases her about turning in the Gift of the Gods Championship, but says she’d be safer just defending it. He then announces that she’ll be teaming up with the Trios Champions, Drago, Fenix, and Aerostar against The Worldwide Underground in an atomicos match (fancy lucha speak for an eight man tag). Mundo then runs in looking for Taya, but decides to formerly introduce himself to Sexy as the next Gift of the Gods Champion. Sexy takes out her rage on the lockers in front of her. 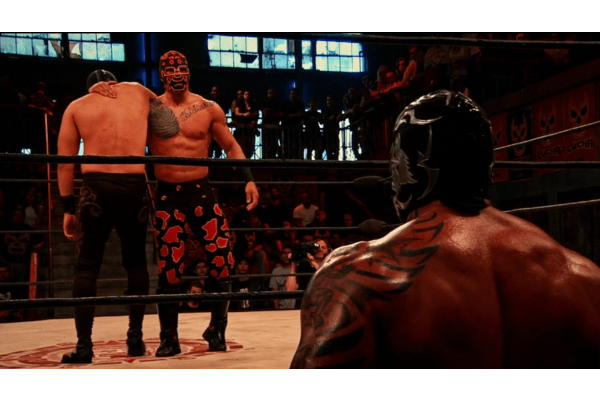 So, Prince Puma seemingly asked for this match due to Siniestro’s relation to Mil Muertes (although commentary announces he’s on his own now), and Siniestro’s involvement in burying Konnan. Puma absolutely schools Muerte with some beautiful lucha. Siniestro gets in some few bits of offense, but this one wasn’t anything more than a squash to show off Puma’s new attitude. Mil Muertes comes into the ring, and attempts to attack him, but Puma redirects him outside. He death stares Mil down, as puts Muerte away. Post-match, Puma comes diving outside of the ring on Mil, and we’ve got ourselves a donnybrook! Mil tosses Puma back into the ring, but Catrina holds Mil back! I’m digging this build here. SQUASH

We go to Dario’s office, where Cortez Castro walks in. Dario stands up from his desk, and embraces him. He wanted to check on him, and apologizes for the loss of Cisco. Cueto says they’ll find the murder, and says it must have been Big Ryck due to the whole cigar incident back in season one. “Life must go on.” says Dario as Cortez goes to leave as Melissa Santos announces him to the ring in the background. We already know Joey Ryan has outed Cortez as a cop, so this should be fun to watch Dario play with him. 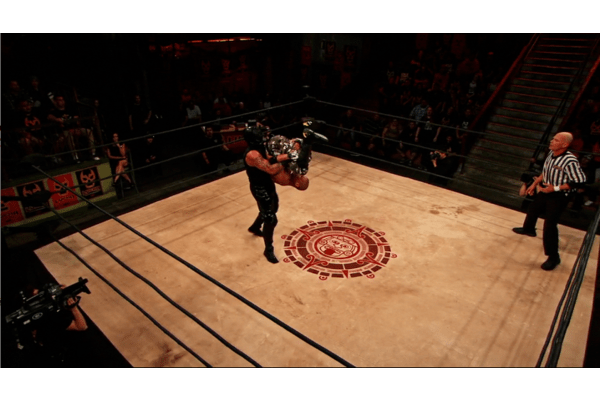 Pentagon Dark grabs the microphone, and runs down Dragon Azetca Jr. and Chavo Guerrero. He’ll get the winner of that match, and says they won’t stand chance against him because “He’s Pentagon Dark, and CERO MIEDO!”

Winner: Worldwide Underground after a superkick leads to a jackknife backslide cover from Jack Evans on Sexy Star

This match is incredibly fast paced, and you get a ton of tags, and some wonderful tandem offense. Aerostar steals the show everytime he comes into the ring, and I love him for it. As the match progresses, Sexy Star plays the babyface in peril, as the Worldwide Underground run roughshod over her for several minutes. Sexy finally breaks away, and makes the hot tag to Drago, who gets the house of fire run.

The match breaks down from there, and the action moves at a frantic, chaotic pace. Jack Evans and Sexy Star are in the ring, battling it out, when Johnny Mundo comes into the ring, and sends it all home. Really fun match, and something I wish Lucha Underground would do more often. The dudes celebrate on the inside, but Taya cries of pain on the outside bring them out. She’s clutching her ankle, and the boys carry her out of the arena. Geez, I’d hate for her to be hurt. I enjoy Taya’s work a lot. ***

Backstage, Mil Muertes is in some sort of room with an alter. Siniestro de la Muerte bows before him, and Catrina comes up behind up to express Siniestro’s apologies. She says he has failed them for the last time, breaks his neck, and steals his soul. She breathes it back out in Mil’s direction, and she expresses her wishes for Mil to do the same to Puma. 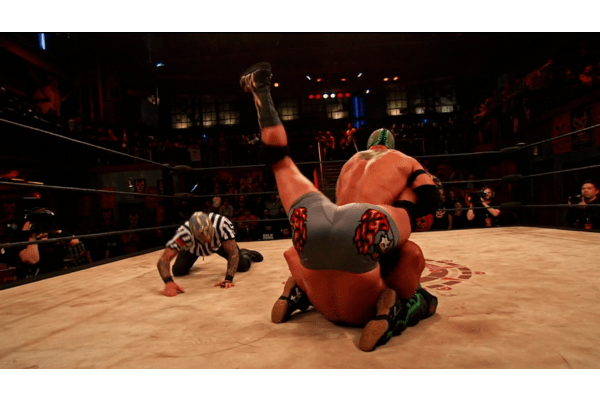 They open with some slow trade holding, which commentary hammers home that Chavo is in firm control of the match. We get some flashes of speed from Dragon Azteca Jr, who’s lucha moves are smooth as silk. Chavo swings the match further in his favor by catching Dragon off of a plancha, and runs him into the guardrails. Chavo continues to control the match, and locks Azteca up in a single leg crab. Azteca reaches the ropes, but Chavo says he tapped out. He argues with Rey, and shoves him to the mat when he disagrees. Chavo then punches Rey, and Rey fires right back, which allows Azteca to get the sneaky win!

Chavo goes to attack Rey again after the match, but Rey hits him into the ropes, and hits the 619 to send the fans home happy. I’m not a large fan of the booking of this match, because I think Dragon Azteca need to look more threatening then what he did in this one, but I’m sure this will matter next week when he faces Pentagon Dark. Either way, very slow match and didn’t feel very main eventish at all. * and ½ *

Black Lotus stands in front of a shrine dedicated to her father. She says that even though she has killed the man who murdered him, her work in the Temple isn’t finished yet. She’s going to use the Black Lotus Triad to destroy Pentagon Dark for stealing the mask of Dragon Azteca. Three or four ninjas stand at her side as we go to the credits. And with that, we are out!

Overall Rating: 6 out of 10 Ultimately, this was very enjoyable episode. There wasn’t a ton of great wrestling, but the storyline development was still there across some of the major feuds. Really, I think we’re all just waiting for this war to start, and we’re going around in circles until then. Some feuds (like Iveliesse and Catrina, and the Immortality Amulet) have fallen to the wayside a bit, and I’d really like for them to bring those back up again sooner rather than later.