I was a bit skeptical when Nintendo announced a sequel in the Marvel Ultimate Alliance franchise. The trailer did almost nothing for me, as it just looked like MCU Diablo. However, after Square-Enix showed off their own Avengers game, Marvel Ultimate Alliance 3 shot up in value in my eyes.  While it’s not a perfect game, it does decently continue the same Action-RPG standards of the games before it.  Although, the reduction in production values and general laziness in the design of the game does hurt its overall quality. 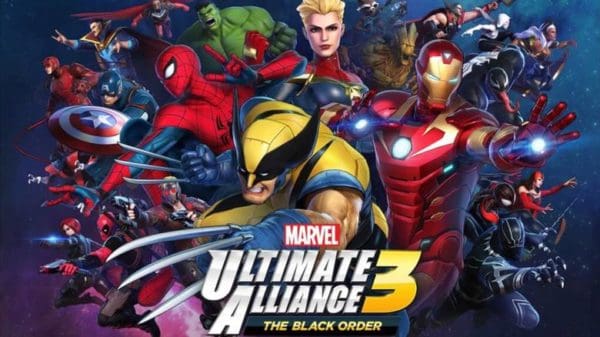 On the surface, MUA 3 looks like MUA 1 or 2, or the past X-Men Legends games.  You control a team of four characters, which are generally made up of the bigger superheroes in the Marvel universe. While you proceed through levels, fighting nameless enemy baddies, and occasionally tangling with a boss or an actual major villain. 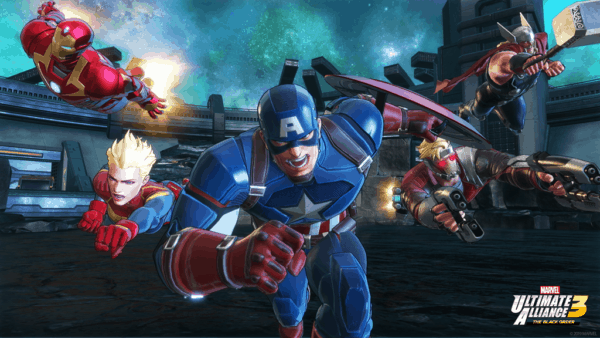 The story in MUA 3 is a mixed bag.  While it does go into some interesting places later on, the start of the game could not be more boring, due to a heavy reliance on Marvel Cinematic Universe themes.  The game starts with the Guardians of the Galaxy before dovetailing into a story about collecting the Infinity Stones, before the game gets actually interesting.  Marvel fans just got done with two, fairly long movies about the Infinity Stones/stopping Thanos. It wasn’t really necessary to have a game with a similar story in it too.

Unlike the other games, the characters only have four powers for the entire game. Not joking here, There’s no swapping or getting new powers as you level up. However, you can power-up your special moves, but the game doesn’t explain this at all and I only discovered it when stumbling into a menu.

Characters also have an ultimate attack, which either deals damage to all the enemies on screen, or deals massive damage to just one enemy.  It is possible for the other characters to do their ultimate attacks simultaneously, provided they have the energy to do it.  This deals even greater damage to any targeted boss or enemy. 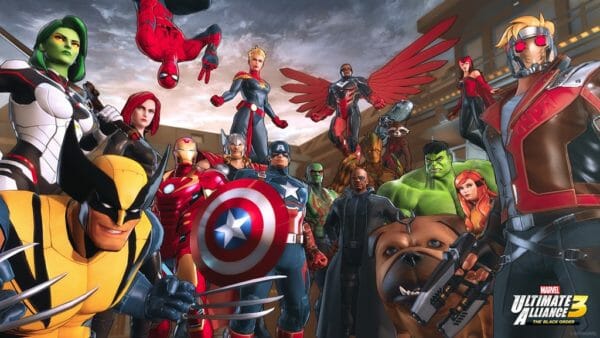 The roster for this game is a tad on the shaky side but is mostly OK.  My early fears that it would just be MCU characters was almost met, but there are some unique people included.  There are the old stalwarts of Thor, Captain America, Spider-Man, Iron Man, etc. Then, there are lesser MCU characters such as: The Guardians of the Galaxy (you start the game playing with them), Black Panther, Captain Marvel, Black Widow and Loki.

Furthermore, there are some deeper cuts and business-related characters that pop up.  One good example is Elsa Bloodstone.  I’m betting at least 90% of you have no idea who she is.  Crystal, of the Inhumans, is another one.  There are some X-Men characters in it like the expected Wolverine, but also Nightcrawler, Storm Magneto, Psylocke, and others.  This is somewhat of the weakest roster in these type of games, but it’s not terrible either.

The past MUA games were very much in the vein of Diablo games. Credits would drop from enemies, gear could drop from bosses and you could outfit your character with said gear.  You could also give them an item that might add a petrify chance to their attacks, or just increase their stats, letting them deal more energy damage.

This game has none of that.  There’s no gear, store, even character customization. There is a customization wheel, but it’s really not the same thing.  This is a good example of what I mean by the game just kind of feeling “cheap.”  Some characters have alternate costumes or specific “Infinity Trials” (solo missions) but they are nothing special.  There’s no special dialog or unique bosses, or even the trivia game from past MUA games. 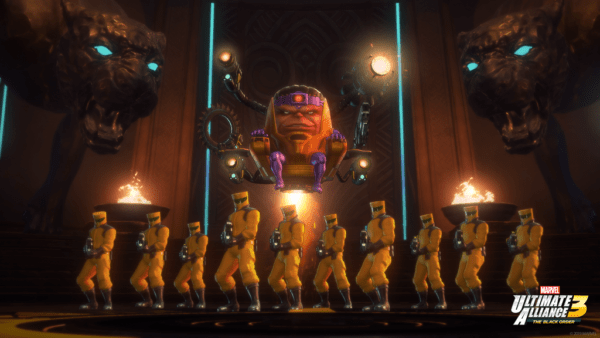 The game being made on a tight budget is an unfortunate but it may be a necessary requirement to get the game made.  How they screwed with the combat in the game is the more unforgiving thing. Normal enemies have regular health bars and go down with ease.  Some bigger enemies and ALL of the bosses have shields/stamina bars and they make the game a real slog.

You have to whittle down these stamina bars in order to actually do damage to the enemy.  Once they are vulnerable, the bar quickly recharges, so if you wail away at a boss for a minute to make it actually vulnerable, the boss is only vulnerable for about 15 seconds until it becomes immune to damage again.  If you really plug away at it, you might be lucky enough to stun it, which prolongs the vulnerable status a little but it still isn’t enough.

If anything, the combat flow here reminded me of Final Fantasy XIII.  You had to just beat an enemy senseless in order to stagger it. Once stagger occurred is when the real damage started. This combat system wasn’t good in that game and it really sticks out badly in MUA 3. Truthfully, it makes sense for certain extremely strong villains like Thanos or Dormamu but against a Sentinel or Electro?  Not so much.

Lastly, there are an extreme number of bosses in MUA 3, especially near the end of the game. Making it feel overloaded with (non-fun) boss fights that drags down the experience even more. Prime example, the last world is literally a series of boss fights and that is it. 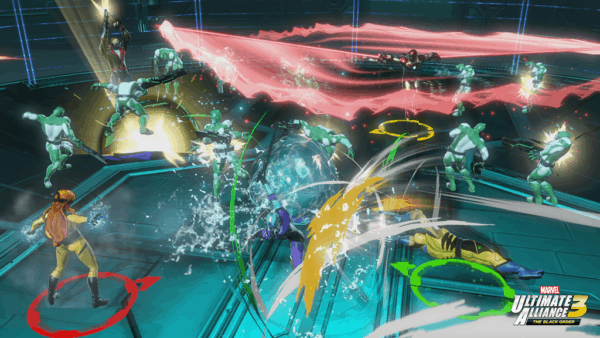 MUA 2 used a gameplay system featuring fusion attacks. Where You could control the damage of your ultimate attack with a teammate. Those fusion attacks took three forms: single-target, area of effect, or “directed” (you control the character for a bit). MUA 3 doesn’t have that, it only has the ultimate attacks as stated above.  It does have a quasi-replacement system called “Synergy Attacks” but it’s kind of bad.

You actually have two different power wheels in the game, one is on R and the other is on ZR.  The one on R is just for doing special attacks.  The one on ZR is for these synergy (team-up) attacks. These attacks feel super awkward. First, the game doesn’t explain this in an in-depth matter, so both my co-op friend and I didn’t realize they existed for about a third of the game.

Your AI companions can also do synergy attacks but this doesn’t exactly work well either. Normally attacks happen using the X/Y buttons and B jumps.  The A button does the synergy attacks but it’s very unnatural to move your thumb from Y or X to A in the split second the icon shows up to do the attack.  Although these synergy attacks do more damage than regular ones, they shouldn’t require so much work to pull off.

You can strengthen your team of four with specific powers using credits, AP points, and ability spheres.  You get AP points by leveling-up the characters. While spheres appear randomly while playing, though they can also drop from treasure chests.  Powering up your moves generally reduces their energy costs, adds more stagger to your attacks, or does some other effect.  However, characters all level-up individually making the next system not fun at all. 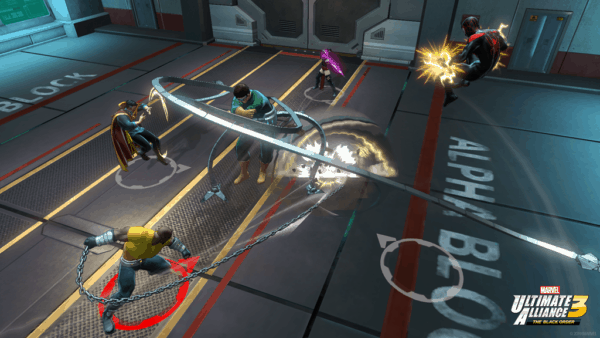 The actual powering-up of your team is kind of a nightmare. You have to spend credits (a lot of them) and enhancement points in the Alliance Enhancement section.  Enhancement points are occasionally found in the game, but you primarily gain them by leveling-up your characters.  The astute among you may notice a problem.  It is far easier to level-up low-level characters than to max out a character. However, if you have a particular character or team setup you like, you’ll end up slowing the rate of enhancement point drops immensely. Making the whole system look and feel like a bootleg Sphere Grid from Final Fantasy X.

You can also alternatively power up your characters with Iso-8 chunks. For the unitiated, Iso-8 is a fictional Marvel substance that is cosmic in nature which boosts the stats of your characters.  There are different colors/sizes that correspond to different attributes. For example, purple Iso-8 deals in the strength stat, while orange increases energy damage attacks, red increases vitality, etc.

Iso-8 can also become more effective as you upgrade. Although, you’ll need credits and the requisite Iso-8 containers to do so.  It’s an exponential factor though, so you may need 600 to upgrade the crystal one time and then 1,200 to do it the next.  You do get a fair amount of duplicate crystals to break down for materials but the whole thing is a bit of a slog. 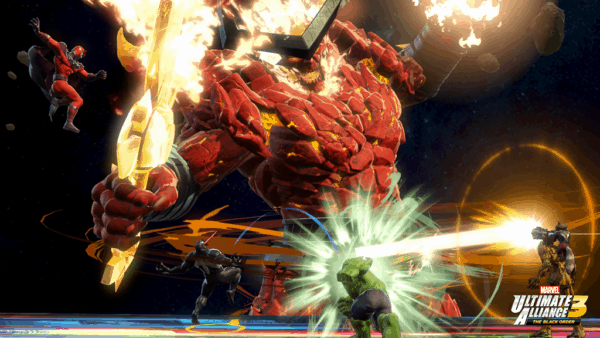 A somewhat annoying issue in the game is when a LOT of stuff happens on screen.  The framerate can drop like a stone during certain encounters, for seemingly no reason.

There are also some difficulty spikes that make combat even more frustrating.  A friend and I played through a solid chunk of the game with no problems.  But we hit a particular boss, Dr. Strange, and we died about five times. Things got to the point where we had to bump the difficulty of the game down because we just could not beat him without doing so. Although, We had zero problems up to that point.

Also, co-op is rather strange in MUA 3. The host player can pick/control three of the four characters in the party.  The other player gets one. Why?  If you have three people playing, the host gets two characters and the other people get one, which makes a bit more sense, but I still shake my head at this.  In the 2-player scenario, each player should get two characters to pick/control.  This would certainly help with survivability in the game.

Overall, I guess I enjoyed my time with MUA 3.  It’s not as good as the others, but since there aren’t a ton of co-op dungeon crawlers coming out, and even less good Marvel games out there, I’ll take what I can get.  It’s still fun to play, especially if you have at least one other person to complete the game with, but on the whole, I just feel disappointed that the game didn’t aspire to do anything new or different.