In 2015, Moon Studios released a gorgeous looking platformer that took the world by storm.  Winning several awards for the art direction alone, Ori and the Blind Forest stood over other independent games with amazing graphics and fantastic gameplay.  During E3 2017, a direct sequel, Ori and the Will of the Wisps was announced and players waited three long years to control the little white guardian spirit all over again. Those three years certainly proved worth the wait.

Review: Ori and the Will of the Wisps 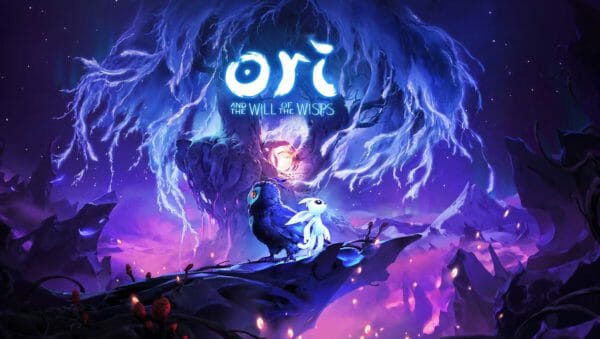 Ori and the Will of the Wisps story begins with the last egg of Kuro, from the previous game, hatching.  The little owl and Ori become good friends as Ori helps Ku get over his fear of flying.  Ori gives Ku a feather from its mother to help grow confidence and Ku is able to take off and the two fly around together.  Unfortunately, they get caught up in a storm and the two come tumbling down over an unknown land called Niwen.  They become separated in the crash, and Ori sets off to find his friend.

However, the land of Niwen is in bad shape. The area is filled with monsters and the water is extremely poisonous.  While searching for Ku, Ori not only runs into furious fiends, he also meets several residents of the area informing him of the turmoil plaguing the land.  The Spirit Willow, Seir, has been dying and losing all of its power.  Ori is asked to help restore the land, which in turn, he’ll receive help on finding his lost friend.

Niwen pops off the screen with some of the most colorful artwork found in any video game.  Each area looks unique and beautiful in their own way.  The edges of the trees and rocks sort of blend together, but this makes Ori’s glowing body and the enemies stand out.  The backgrounds have an insane amount of depth making this 2D platformer come alive a little too much. The colors and backgrounds are so ingrained that they can blend together. Making small things such as switches get lost in all of that detail. Ori himself also blends in during portions with explosions and flying projectiles, especially in chase sequences.  There are also times where you can’t differentiate when damaging the enemy, or yourself. Thankfully, there is an option in the menu that displays damage, which really helps resolve this last issue.

Musically, this game does a fantastic job of creating an intense atmosphere.  Each different area in the game has its own music which fills a room with impressive sound. The boss music is nice and all, but the atmospheric music is its own experience. It not only makes you feel more immersed in the gameplay, but it is also perfect to listen to in the background while writing this review. Once again the developers opted for the mumbled, strange language approach to the dialogue.  While not an issue, it does make some of the characters sound rather similar. Especially those with a lower tone, as each one really tried to go for that bellowing feel to their voice.

Bringing a Sword to a Platformer

Ori and the Will of the Wisps follows the same trend as its predecessor of being a difficult platformer. There are several gaps and obstacles that ask for pinpoint accuracy to get through unscathed. The land is filled with dangerous enemies who are looking for nothing more than to destroy Ori just for looking at them funny. Luckily, the sequel has added more on the combat aspect as Ori now has a melee attack to go along with plenty of new upgrades.  This allows Ori to go at enemies head-on and rack up spirit energy.

This adds an extra element that the original was lacking, as the original felt more of an avoid and counter system when it came to confrontations.  While the combat feels better, the normal enemies roaming around seem much stronger too. It takes a lot just to take some of them down, and it still feels a better use of time just to avoid combat when possible.

One of the new additions to the sequel is the hub world that is unlocked partway through the game.  The hub creates a sense of a living world. While also adding depth with extra collectibles and side quests.  In the hub world, Ori is able to upgrade or purchase new abilities, help the local villagers, and can use ore and seeds to build the small little village.  It is a nice place to take a break from all of the jumping and sword swinging.  While also serving as a communal area for all of the NPCs too.

The smooth flow of motion is still the strong suit of the series.  Especially in the late game, after unlocking several movement abilities that make tough platforming sections a small stepping stone.  There are several warp zones that you can use anytime you have two feet on the ground, but traversing through the world is so much fun you sometimes forget that is an option.  This is where the chase scenes really excel.  The amount of destruction and falling objects around Ori as he attempts to escape a boss is always a sight to behold. There are several chase sequences in the game, and while you would think they would start to get stale, they actually don’t.  The game does a fantastic job of implementing a new skill or ability in the subsequent chase sequence to give it a new feel every time.

Those same bosses that chase Ori all around the world of Niwen, also create epic looking boss battles. Bosses tower over the little Ori, escalating the feel of the battle. With each one feeling unique from another and using different elements of Ori’s arsenal in each fight. The bosses are a major part of the challenge and difficulty of the game. Helping Ori and the Will of the Wisps feel more like a complete game than the original.

All of the amazing visuals and great combat seem to have come at a price. On the Xbox One at least, the game stutters every time you enter or leave the menu, which happens every 15-20 seconds when exploring.  The game keeps a lot of added items off of the HUD. However, a little mini map would have been really helpful.  During my playtime, I also had a lot of freezing issues occur. The issues felt much more frequent on longer playthroughs. As expected, most of the time it would happen is when a lot of action occurred on screen.  However, other instances, such as one where Ori would jump from one platform to another and end up stuck in the air for a good five seconds before moving again. I also ran into three different occasions where the game crashed out completely when entering a dungeon.

This game was reviewed using Xbox Gamepass played on an Xbox One.

For me, the tech issues don’t take away from the fantastic gameplay in Ori And the Will of the Wisps that does a great job of matching the original. The combat and better boss battles really help make it feel like a complete gaming experience.  There are plenty of hidden items to find for completionists and major challenges for the difficulty lovers.  While improving in a lot of aspects, the world seems a little too confined in places, and it doesn’t feel as large in scope as the original, even though the world is bigger. The story also still manages to hit you right in the feels a few different times, even if some of the characters are pretty forgettable. Ori and the Will of the Wisps is a very well done sequel that is more Ori on a grander scale.