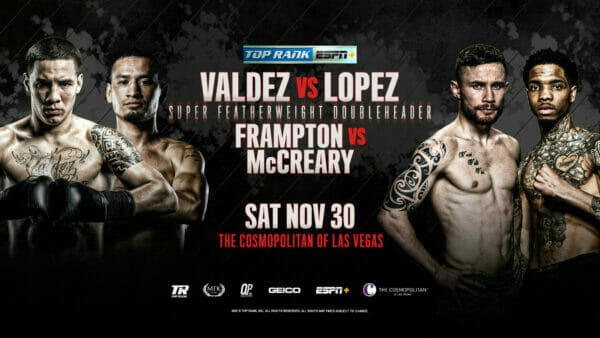 Jon War is back on the RIBN to provide analysis for the Top Rank double header, Valdez vs Lopez and Frampton vs McCreary!

Andres Gutierrez was removed from Saturday’s main event against former featherweight world champion Oscar Valdez, as he weighed in at 141 pounds, 11 pounds above the contract weight.

Featherweight contender Adam Lopez (13-1, 6 KOs), from Glendale, Calif., stepped up to replace Gutierrez, and he will be in the opposite corner at The Cosmopolitan of Las Vegas in a WBC super featherweight world title eliminator. Lopez was originally set to defend his Jr. NABF featherweight title against Luis Coria, but he jumped at the opportunity to face Valdez, who will be making his super featherweight debut.

Check out our Oscar Valdez vs Adam Lopez Alternative Commentary