Rise and Shine is an Indie game published by Adult Swim Games. It is a skill based puzzle shooting side scrolling Action game. You play as the hero, Rise, a child tasked with holding onto the sacred weapon of Gamearth named Shine. Shine is your gun, but also a talking side kick who helps players throughout the game. Shine uses three bullet types and two ammo types. Player’s have to figure out the best combo for each situation. Thus, combining Shine with Rise’s natural Dash ability to dodge, bob, and weave to stay alive in an onslaught of robot enemies and brutal soldiers. 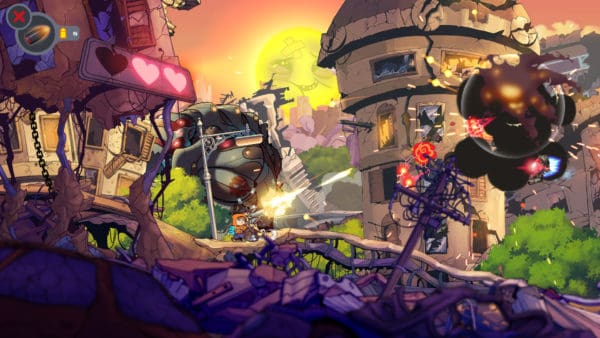 The game is simple at its core, but also has difficult situations. The general premise is “don’t die and walk to the right.” However, some of the scenarios thrown at you come seemingly from out of nowhere. This means players must stay on their toes at all times to stay ahead of the situation. Land Mines pop out of the ground at random and without warning, Forcing players to dodge or shoot accordingly. The enemy’s only form of attack is by swarming the player into oblivion. This is why using the best ammo and bullet combination is important. The main objective is to deal with the most amount of enemies in the shortest amount of time.

However, Rise and Shine isn’t just about shooting things. While the player technically has health, it is so small, most attacks are one shot kills. This makes the game difficult for players who are not very good at dodging attacks, as enemy bullets are nearly always flying at the player. Dodge as they come, or die again and have to restart from your last checkpoint. Dying is almost a certainty with this game, learn from your mistakes to combat each situation in a new way each time. The game gets even tougher playing Ironman Mode. Unlocked once you beat the game at least once, it gets rid of checkpoints, forcing you to beat the entire game in one life. All I can say is, good luck with that. 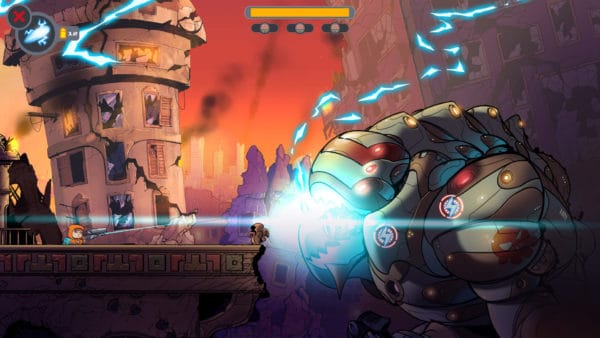 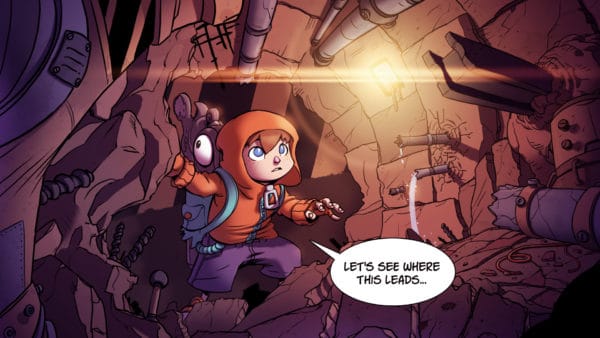 As I’ve already mentioned, this game can be pretty difficult. It is not a game casual players can pick-up and play. The art style is great and the story is full of tongue and cheek references to old Nintendo classics that will keep hardcore Gamers looking for more. Despite that, the constant threat of danger. The timed puzzles. Not to mention, the onslaught of enemies can be exponentially hard for newer Gamers. You can also beat the game within a few hours, if you figure out the pattern. This also helps make Ironman mode a tad easier too. Especially since enemies and trap placements can be memorized.

The game is fun, but hard

Game may put off more casual gamers due to difficulty

Ironman Mode is won more by memorization than by skill

Overall Thoughts: 8.5 Out of 10 With an amazing art style and clever story, Rise and Shine stands out. The game mechanics are certainly difficult. It has very smooth and tricky Gameplay that will challenge the player to their limits. Testing to see how much mettle the player has and how quickly they can be enraged by the bullet hell-esque battles that will ensue. I once again warn players that the game isn’t for every type of gamer out there. However, if you enjoy hard games, this one will hit that spot right in the center.

for the sake of transparency, the publisher did provide us with a download code for review purposes.

About The Author: Austin Foncannon

Austin is a casual player who enjoys playing video games in his spare time but is sure to balance life with his game time, so he doesn't become the "best" at the games he plays but that doesn't stop him from doing his best to win each time. Fighters, Shooters, Real Time Strategies, he plays a little bit of everything. Some of his favorite games include: Super Smash Bros., Rainbow Six Siege, Dark Souls, and Tekken. Just to name a few. While he may not always be up to date on the gaming news, he is sure to keep his head level with hard facts and appreciate classics as well as newer games. Youtube Channel: Auscarsy Twitch: Auscarsy Steam name: Mymomateurs Xbox Life Gamertag: Auscarsy117 WiiU Name: Auscarsy Email: Itwasmeaustin316@gmail.com Skype: Auscarsy