It should be noted that this was taped before Death Before Dishonor. 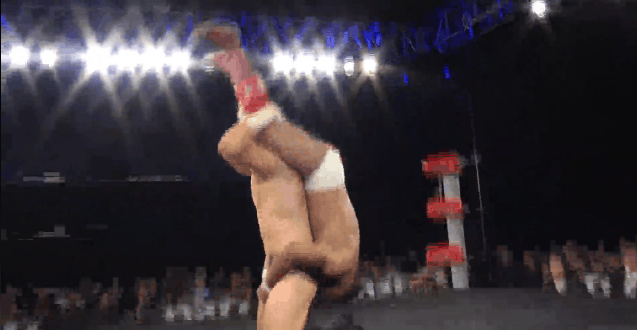 Jonathan Gresham is a great wrestler who really deserves a fair shake with one of the major promotions in the United States of America. Hangman Page is coming off the big victory at Death Before Dishonor XIV. Gresham really gets to show off his athleticism here. However, this would get him into a fair bit of trouble with Page at points. For example, Page would catch Gresham after a dive off the apron on his shoulders and then catapult him into the ring post. Just nasty. Gresham wouldn’t go away though and really get a lot in against Page. Gresham could be a great fit for ROH I hope they sign him at some point. Page wins. **

Talking Segment: The Cabinet get a promo where they announce they’ll be taking on Dalton Castle and the Boys next week.

Talking Segment: We get two announcements focused on the tag team division. First, War Machine will face Shane Taylor and Keith Lee next week. Second, The Young Bucks get a ROH World Tag Team Title match against The Addiction next week too. The Young Bucks then cut a promo with the rest of the Bullet Club to hype the match. 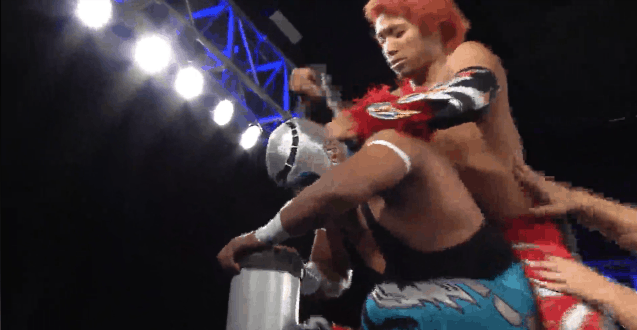 Winner: Kamaitachi (After a Roll-Up)

Stuka Jr. makes his Ring of Honor TV debut here, in the first display of the new working agreement between CMLL and ROH. Kamitachi started his excurison in CMLL before he came over to ROH. Lots of Lucha sweeps and feints to start us off before we get to see Stuka Jr. really show us what he’s got. Even though he’s a bigger guy, Stuka Jr can really move. Stuka Jr. really loves the topes and moonsaults too, which gets the fans buzzing. Kamaitachi and Daniels heel it up, with lots of distractions on Daniels part.

Kamaitachi unlaces Stuka’s mask mid-match, which would come back to haunt Stuka. Down the stretch, Kamaitachi sends Stuka Jr careening into referee for the REF BUMP! Stuka then takes Daniels out with an insane twisting plancha to the outside. He punctuates it with a top rope splash onto Kamaitachi, but the referee’s still in la la land. Kamaitachi removes Stuka’s mask after Stuka rouses the referee and the quick roll up gets him the win! ** and ¼*

Video Package: Next, we get a video package for Kevin Sullivan, BJ Whitmer, and Steve Corino continuing the Legacy of Hatred story. BJ has a big black X on his head, and Sullivan talks about sacrificing one of his sons. It’s a very odd package. 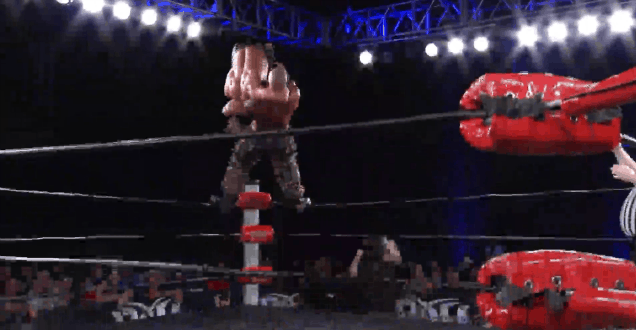 No Winner due to Time Limit Draw

Jay White is still undefeated in ROH. I am a big fan of both of these guys and I hope we get a good match here. Commentary really hypes up how big a test this is for White. Hard to disagree with that as Jay Briscoe is a former World Champion. Briscoe dominates the majority of the match. White really does an excellent job of selling the beating he’s taken, even when he’s dishing out the punishment. You can really tell Jay White watched Kazuchika Okada a whole bunch. White’s dropkick looks like Okada’s dropkick’s ghost.

Down the stretch, Briscoe has had enough of White, and just starts running him over with big strikes. It still isn’t enough. Briscoe hits a brutal superplex, and they work the double countout. They come up to their knees, and start trading some tired looking forearms. However, before they can get going again, the bell rings. The fans are confused, the commentators are confused, and I’m confused. It would seem as though we’ve run out of TV time, so it’s declared a draw. Well now, that’s a way to keep Jay White undefeated. ***

Overall Rating: 5 out of 10 This was a fine wrestling show, but seeing as it was taped before hand, it doesn’t have anything to do with what happened at DBD. Honestly, it really stinks. You get some mentions of it here and there on commentary, but coming off a hot show, I’d really want to see some follow-up. Here’s an idea for you ROH. Don’t do Friday PPV’s! Give yourself some time to tape a follow up show, so you can keep the momentum going that you had built up so well. Maybe it’s just something we’re going to have to deal with, but there has got to be a better way.