It’s October and what better way to get into the spirit of Halloween than reviewing scary games. There’s one scary game in particular that has added to its mystery and spooky scariness of the franchise. Brand new and still creepy, Five Nights at Freddy’s: Sister Location An interesting title right? Let’s start off little by little what this game is about and how awesome it is. 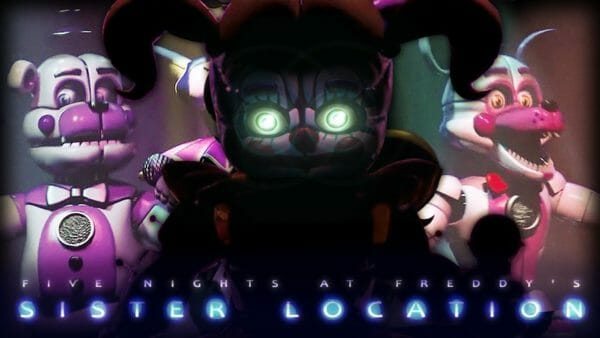 When the first trailer released, the game was introduced solely as Sister Location. It wasn’t until a few months after that, fans and the FNAF community realized the validity of the game. Now that doesn’t mean it’s the same gameplay. The developer, Scott Cawthorn, is known to mess around with the community. From just sitting and watching a camera in FNAF 1. Then, in FNAF 3 there’s sealing vents and making sure all systems are up because if not, a zombie in a bunny suit kills you. Cawthorn is a troll in his own games.

If you never played a FNAF game before, it’s probably good to know each game in the series introduces something new in the gameplay. Also, something new is introduced into the story as well. All the while, keeping the fear factor up to ten and the rage level to over 9000. However, don’t expect the same in Sister Location.

Listen to the Cues

This game is probably the worst of all four FNAF games combined (in a good way.) The reason being, is it includes factors of the old games and incorporates them into “mini” scare games. In FNAF 1-3, the player was a security guard watching cameras, with twists and turns here and there.

The puppet and Springtrap were too much even for me. However, FNAF introduced Audio as the main cog to getting around. Instead of relying on visuals from the camera, the player had to listen for audio cues that signaled when robots passed by. Did I mention there are animatronic robots trying to kill you? The weird thing is, the rest of the games are based more on visuals, instead of audio cues, which is why to see it in Sister Location again is surprising. This proves that Cawthorn is indeed a mastermind, and well, a troll at making video games. 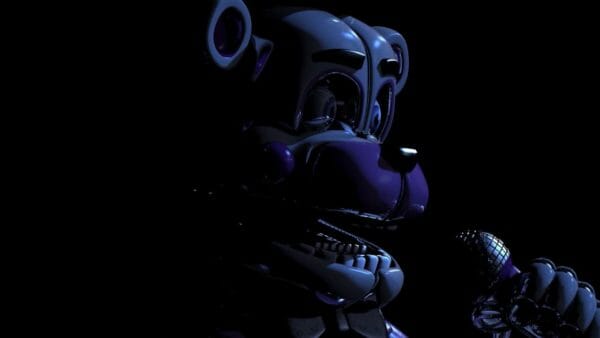 The audio comes in handy more on the second night. Of course, theories are being made as to who the player is, and why exactly you shock animatronics, (as if the player didn’t anger them enough by disturbing the murdered children’s souls and poking at them for singing the same songs over and over again.) But we do know we are making sure the Sister Location animatronics are in their places before getting shipped off to do private parties. For more information on that check out Mat Pats theories on Sister Location on his channel Game Theory. He actually proves by source code that the new animatronics are used for booking parties.

On the first night, we are introduced to Funtime Foxy, Ballora, Circus Baby, and Funtime Freddy. Now, we know it’s a for sure that Sister Location is a literal meaning of a sister franchise with Freddy and Foxy being a main antagonist in past games. Although, on night two the player deals with a few extra baddies. Start with the desk (probably the most easiest “mini” scare game to get passed) the player meets Biddybab. But then the player has to meet Ballora. Pretty name right? WRONG. Ballora is probably the most angry animatronic in this game. She hates going on her stage, and she takes the grudge she has for her creators on anyone who passes through her room.

That’s where the gameplay of audio comes in. While under the desk, the player was told by (it is assumed) Circus Baby to tread carefully and to listen when they enter Ballora’s room. You then have someone to conflict those directions, the voice module. Who do you listen to? Baby or the voice module? If you chose Baby’s directions you can get passed easily. The tension is high but your ears are listening for Ballora’s music to know that when she’s near, you stop until she is gone.

If the player listens to the voice module then it’s game over. Ballora doesn’t like noisy people. This aspect of the gameplay takes back the player to FNAF 4 and adds a twist of it’s own, creating something new, and something else to worry about. 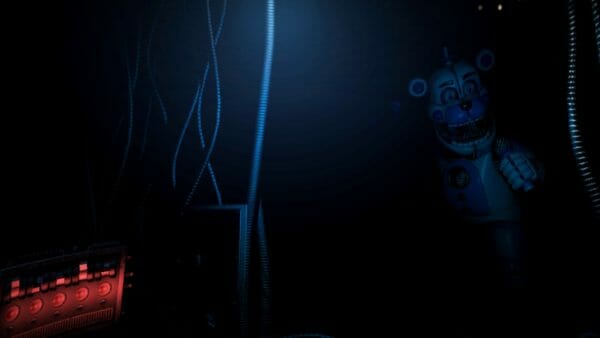 After Ballora comes a date with Funtime Freddy. Another interesting “mini” scare game. You have to reboot the systems, without disturbing Freddy. If you do, well…let’s just say he wanted to play with his friends. But here’s where this mini scare game goes back to FNAF 3. FNAF 3 you had to reboot systems like the vents, camera, and audio, all to keep Springtrap away from your room. But that’s not all, you had Ballon Boy’s audio to play in different rooms so that Springtrap could be distracted.

Same concept applies in the Funtime Freddy scene. Reboot the systems, take your time. If you hear something, put the screen down and play Chica’s audio. This calms Freddy and let’s him go back to his “stage” and allows you the player, to get systems back online.

Now that’s a lot to take in for night two right? Another proof why Cawthorn is a troll with his games. No longer is the survive till 6 a.m. rule applies, but now, you HAVE to get past those mini scare games. Night three is even worse. But Cawthorn knows the struggle the player has been through, so he gives a little…easter egg. By disobeying the modules directions, the player can access more of the game’s backstory by going under the desk that was used to prevent the Biddybabs (Circus Baby’s minions) from killing you. It is there, that Circus Baby’s voice sounds, and explains a tragic day in which (SPOILER) she killed a child.

Normally those type of story points from past FNAF games came from hidden messages or even in the Atari minigames. The fact there is even more than one voice actors in the game is even mind blowing because it’s helping players solve the story and lore! These two aspects combined, make Sister Location special when it comes to story telling. Now to get most of the story we don’t have to look hard through a bunch of cryptic messages and easter eggs but we get it, smack in the face, 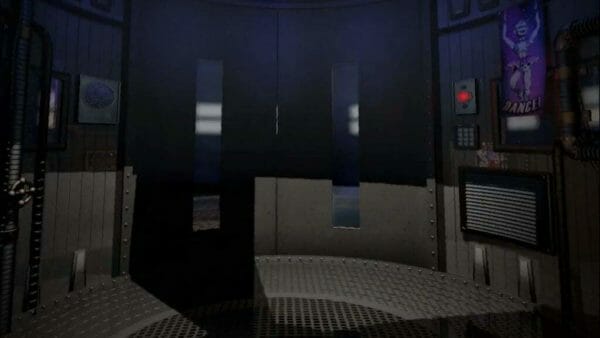 So the easter egg. Given in a different manner entirely than normal. But then there’s Foxy. My companion and friend. Noted even by Scott, that it is the worst jumpscare of the game. But not impossible. Flashing your flashlight and being patient while you wait for it to stop charging, and for Foxy to move, you can get through her (or his) room. This mini scare game is similar to FNAF 2 when you did have to flash Foxy in order to get him (or her) away from you.

In the next room you can meet Freddy again, but don’t worry, you’re just deactivating him for parts and services. Bonnie (my worst enemy) is the only real threat, and you can get by him if you, again are patient. The originality of the game comes back with this mini scare game, technically new gameplay than past games. (Noticing a pattern? If you haven’t no worries I got you covered.)

Leaving this room after the task is complete, activates a forced Foxy jumpscare, but don’t worry because in night 3 you’re given a new task. Stuck in a springlock suit (foreshadowing?) you have to make sure all the spring locks are in place, keeping them tight, if not the suit will pierce you and kill you. Now, that’s not the worse part. You have to deal with Ballora’s minions, the Minierinas. Such fun times. They’re difficult to get passed, but time yourself, be patient, don’t panic.

Why Sister Location is Great

This gameplay reminds a lot of FNAF 2 game play when the player had to keep the music box going to prevent the puppet jumpscare. Coincidence that they look similar to the puppet? Maybe not, but this is where we, the players, know for a fact that Sister Location isn’t just about fixing animatronics and disciplining them when they behave. No, this game is about patience. It’s central theme is exactly that and compared to the other games, panic and crying while you desperately waited for 6 a.m was all that could settle in. Sister Location you can’t panic. You have to be cool, calm, collected, and controlled. If not, try to pretend.

A lot to take in, which is why the rest of the game you, reader, can check out for yourself! The rest of the nights actually contain a lot of easter eggs, more than you think, which is why I will say this, there are two endings, just like in FNAF 3 and FNAF 4. Just keep in mind those atari style mini games are back in this one and it’s important all the cupcakes are given.

Otherwise this game is pretty cool. The story of Circus Baby and the animatronics being shocked, is tragic and sad. When the first FNAF story parts and lore were discovered, it isn’t a surprise that Sister Location is just as tragic. But the gameplay is just as good as the story, and beautiful. A jewel in it’s own self. I could be giving this game more props than it’s worth, but I do enjoy playing this game. I hope you, the reader, will as well.

Be sure to check out my channel Saki Sakura, and watch all the FNAF videos I have on there. Also check out Mat Pats Game Theory channel. There is a lot that makes a lot of sense when it comes to the FNAF series theories. Also be sure to tune in to the Foxy and Squid show here on W2Mnet.com as well.