On February 22, 2016, Shane McMahon returned to the WWE after a six year absence from the company.  His return was a huge shock and was met with large applause.  It was great to see “the prodigal son” return home to the WWE.  Shane’s return came due to his feeling that both his father and sister were ruining the company his family built. Now, he has returned to take control so he can bring the WWE back to what it once was. It’s a storyline that hit very close to home, and seemed oh so real. Many of wrestling’s hardcore fans were saying the same thing about the product. Shane was set to be the savior of the WWE, but to do that, he would first have to defeat the Undertaker at WrestleMania 32.

Shane-O-Hack: Why Shane McMahon Should Not Wrestle AJ Styles 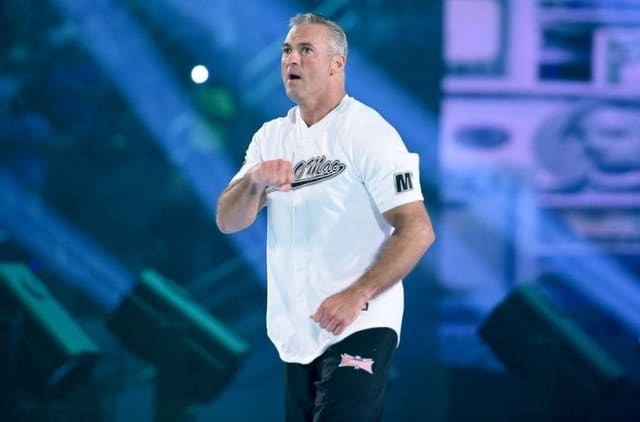 We all remember watching Shane take insane bumps throughout the years.  Shane threw caution to the wind, and literally put his body on the line every time. It became a treat for fans to see him in these high profile matches.  However, the current Shane McMahon is much different than before. For one, he’s in his late 40’s. His hair is grey. His skin is a little bit more baggy, and some how we were expected to believe that a 47 year old, untrained businessman could have a good match, with an also much older Undertaker. Even pushing reality aside, the WWE has used Wrestlemania to make the Undertaker appear ageless. The Undertaker has only lost one Wrestlemania match in his history, and now found himself booked to face Shane McMahon at Wrestlemania 32.

The match itself was decent, if I’m being kind. At least, it did live up to the promise of having big spots.  Shane doing his leap off the cell is now a Wrestlemania moment. However, the idea that Shane could keep up with the Undertaker still bothered me though.  In reality, Shane should have lost that match when Taker hit that first Last Ride. At the very least, the Choke Slam on the steps should have did it. I mean, how many real wrestlers have we seen eat a three count after moves like that? But, I guess Shane McMahon is just “more resilient” than all of WWE’s roster. Undertaker eventually won, but Shane McMahon also got to keep running RAW as well.

A lot has transpired in the wrestling world since then. There’s been a brand split. A subsequent WWE draft. And Shane McMahon is the commissioner of the rechristened Smackdown Live, thanks to his father, Vince McMahon. Plus he even has Daniel Bryan as his general manager. Despite Smackdown continuously being talked about as the “land of opportunity,” Shane still finds himself booked into matches. Taking up spots which could go to other members of the roster.

Why is Shane McMahon occupying a space on team Smackdown? Theoretically, the team is supposed to be Smackdown’s five best superstars.  His spot could have gone to Baron Corbin, The Miz or even Dolph Ziggler. Why not do something with Apollo Crews? His talent is being wasted away on the main roster.  Instead, we had to see Shane mix-it-up again. At least at Wrestlemania Shane had his big moment. This time, Shane just plods along, until he gets legitimately knocked out while trying to hit his trademark coast to coast dropkick.

Moving to the Present

Now, fast forward to the present. It’s Wrestlemania season, and the rumor mill is flying. The rumor mill currently has Shane McMahon booked against AJ Styles for the show, with the writing already on the walls for the match to happen.  After the Royal Rumble 2017 winner, Randy Orton, gave up his main event spot, AJ Styles won the opportunity to face the current WWE World Heavyweight Champion, Bray Wyatt. First, by surviving a 15 man battle royal, which ended in a draw with Luke Harper. Due to said draw, AJ was put into a singles match with Luke Harper the next week on Smackdown. AJ Styles then defeated Harper, after a great back and forth match.

However, the grind didn’t end there for AJ Styles. Randy Orton suddenly decided that he wanted his spot back, after getting some sort of an epiphany while watching Bray Wyatt’s home burn at his own hands. Shane McMahon announced that Styles would now face Orton to determine, once and for all, who headlines WrestleMania with Wyatt. Randy Orton would go on to be victorious, and we would get to this video on Talking Smack:

AJ Styles is arguably one of, if not, the best wrestler in the world. Since his debut in the Royal Rumble 2016, Styles continues to prove that opinion as a fact. There’s no doubt that AJ had one of the greatest years of his career in 2016.  He had incredible matches with John Cena, Roman Reigns, Dean Ambrose and many more. He was also a great WWE Champion on the Smackdown brand. I have no doubt that he could pull a great match out of Shane McMahon, but should he really have to?

Now, I’m not saying that wrestling Shane is a bad thing. In fact, I’m a Shane McMahon fan, but solely as an on-screen character. A Shane match is fun for the spectacle. Honestly, in many ways, this is what Wrestlemania has become. But there’s just a believablitiy that isn’t there. He’s 47 years old and nowhere near the caliber of “The Phenomenal” AJ Styles. Shane is certainly charismatic. He’s energetic, and has some athleticism, but he is not a professional wrestler.  At WrestleMania 33, AJ Styles should be in a “Match of the Year” caliber match, with another professional wrestler. Not trying to help the boss’s son get through a match, just so we can have another Shane McMahon leap of faith. So please, Shane, stay out of Wrestlemania, and leave the wrestling to the professionals.