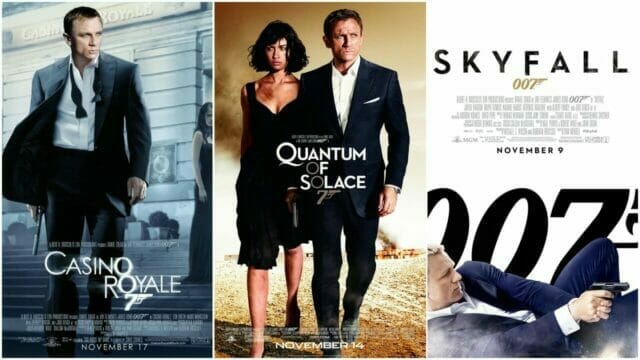 With No Time to Die (2021) in theaters this week we are reviewing the first 3 Daniel Craig Movies: Casino Royal, Quantum of Solace and Skyfall!

Casino Royale (2006) takes place at the beginning of Bond’s career as Agent 007, as he is earning his licence to kill. This is a spy film. It is the twenty-first in the Eon Productions James Bond series. Casino Royale 2021 is the third screen adaptation of Ian Fleming’s 1953 novel of the same name. Directed by Martin Campbell and written by Neil Purvis, Robert Wade and Paul Haggis, it is the first film to star Daniel Craig as James Bond.

Quantum of Solace (2008) is a spy film and the twenty-second in the James Bond series produced by Eon Productions. Directed by Marc Forster and written by Paul Haggis, Neal Purvis and Robert Wade, it is a direct sequel to Casino Royale, and the second film to star Daniel Craig as James Bond. The film also stars Olga Kurylenko, Mathieu Amalric, Gemma Arterton, Jeffrey Wright, and Judi Dench.

Skyfall (2012) is a spy film and the twenty-third in the James Bond series produced by Eon Productions. The film is the third to star Daniel Craig as fictional MI6 agent James Bond and features Javier Bardem as Raoul Silva, the villain, and Judi Dench as M. It was directed by Sam Mendes and written by Neal Purvis, Robert Wade, and John Logan and features the theme song “Skyfall”, written and performed by Adele. It sees the return of two recurring characters after an absence of two films: Q, played by Ben Whishaw, and Miss Moneypenny, played by Naomie Harris.

Listen to our James Bond Villain Discussions, Part 1 and Part 2!