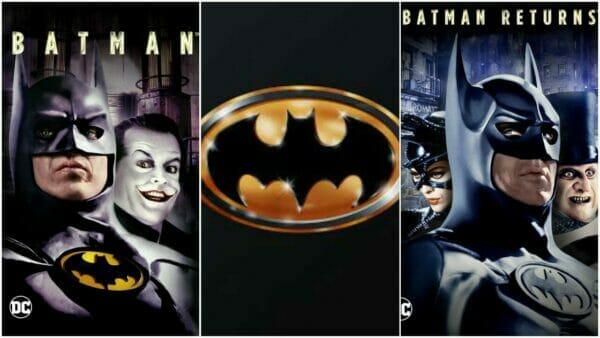 With The Batman (2022) starring Robert Pattinson in theaters this week we’re looking back at the Tim Burton Batman movies! On this episode they discuss Batman and Batman Returns!

Baatman is a 1989 American superhero film based on the DC Comics character of the same name. Produced by Jon Peters and Peter Guber, it is the first installment of Warner Bros.’ initial Batman film series. The film was directed by Tim Burton and stars Jack Nicholson, Michael Keaton, Kim Basinger, Robert Wuhl, Pat Hingle, Billy Dee Williams, Michael Gough, and Jack Palance. The film takes place early in the title character’s war on crime, and depicts his conflict with the Joker.

Batman Returns is a 1992 American superhero film directed by Tim Burton and produced by Denise Di Novi and Burton, based on the DC Comics character Batman. The sequel to the 1989 film Batman, it is the second installment of Warner Bros.’ initial Batman film series, and stars Michael Keaton as Bruce Wayne / Batman, alongside Danny DeVito, Michelle Pfeiffer, Christopher Walken, Michael Gough, Pat Hingle, Michael Murphy, and Vincent Schiavelli. In Batman Returns, Batman faces the Penguin, who plots to kill all of Gotham City’s firstborn sons, while dealing with Max Shreck, a corrupt tycoon who allies with the Penguin to bring Gotham City under his control, and Catwoman, who seeks vengeance against Shreck.

Check out our other Batman reviews!

Only one will claim the night. The Tim Burton Batman Films Review