We’re in Texas for Wrestlemania 32. Divas are dramatically walking. CUE THE PYRO AND BALLYHOO!

Before we get to the 10-Diva (that term is still relevant on this show) tag match, we go back one week.

Brie Bella asks Daniel Bryan to watch her last match at Wrestlemania, but Bryan isn’t on the show and he doesn’t want to be there. That’s tough.

Lana, sans accent, is the newest Total Diva. Rusev’s proposal was legit, “Do you mind, engaging me and stuff?” I’m so excited for him to be featured on this show. Nikki Bella and John Cena are driving somewhere, conversing about something. This doesn’t feel important.

Stephanie McMahon rounds up all of the Divas. She lets them know that they will no longer be Divas and will now be Superstars. Natalya says, “it shows that WWE is changing with the times.” But this show is still called Total Divas. So, um, I guess E! Network is behind the times?

The Divas talk about their Wrestlemania experience. Nattie and Maryse talk about their Wrestlemania history. Maryse tells the story of how the Bella Twins screwed her over in years past. Basically, the women were going to hold out for more money and WWE was like “nah” and then the Bellas caved and took the deal without telling Maryse. So, there’s your drama for the season.

HEY IT’S PAIGE! She’s with Naomi, visiting kids at the hospital. They talk about hair and make-up.

Brie is going somewhere with Bella Mom. Brie tells her that Bryan woke up and felt really great today. Bryan’s grappling coach told him, “you lost your father, you lost your career, and you lost your friends.” Sounds like a nice guy. Brie now switches subjects to Maryse and the comments she made at the dinner, where the Bellas weren’t present. Who cares? You’re leaving the company.

The Usos, Naomi, Lana, and Paige drink it up. Paige is going to dye Naomi’s hair and I will bet everything that this doesn’t end well. Everyone says it’s a bad idea, but Naomi doesn’t listen. Naomi’s hair starts to fall out as Paige adds more bleach and starts cutting it. Don’t they have professional hair and make-up people? Why would you have Paige do it?

The next day, Naomi leaves the hotel and covers up her head. Naomi reveals her new do to the hair and make-up people. They freak out and say they can’t fix it because they are booked. Roman Reigns’ hair doesn’t wet itself.

Nattie talks to Lana about her debut. Lana shows off her WM outfit and Nattie is like, “don’t worry about your outfit, just don’t screw up in the ring.” And then Nattie gives her a vote of confidence by saying, “you know what you’re doing, but you’ll be screwed up. You’ll forget something. Not to be rude. But don’t fuck up.”

Brie, Renee, and Paige head to dinner. Maryse joins them on an invite from Renee, who wants to re-unite Maryse and Brie. She is ready to talk, no time for niceness. MARYSE IS MAD! SHE’S PISSED! They each tell their story. Brie reveals that Bryan never liked Maryse. Oh man, this Miz vs. Bryan feud is so deep. Too bad they can’t deliver on the mixed tag match that they are building to. Nothing gets solved and then Maryse leaves. The other three recap the drama and Team Brie is still Team Brie.

It’s time for Wrestlemania Access. The Divas sign autographs and talk about how they love the fans. They’re making a really big deal out of Lana’s match. They had nine months to edit this knowing she wrestled once and still went with it.

Then, Nikki and Brie go back to the hotel room. They catch-up like they haven’t seen or talked to each other in weeks. Nikki, as usual, makes it all about herself and has no sympathy for Brie and her situation. They argue, Nikki leaves, and I’m sure they’ll work it all out in the next five minutes on show time.

IT’S WRESTLEMANIA DAY! I’ve just been informed that this episode of Total Divas is now three hours, not including the pre-show and possible overrun. Nattie gives Lana a pep talk that is much better than the pep talk she gave her earlier in the episode. Naomi’s hair is suddenly fixed. She said that she flew her personal hairstylist into Dallas and they were up until 5. I guess it wasn’t very exciting since it wasn’t shown on this episode. 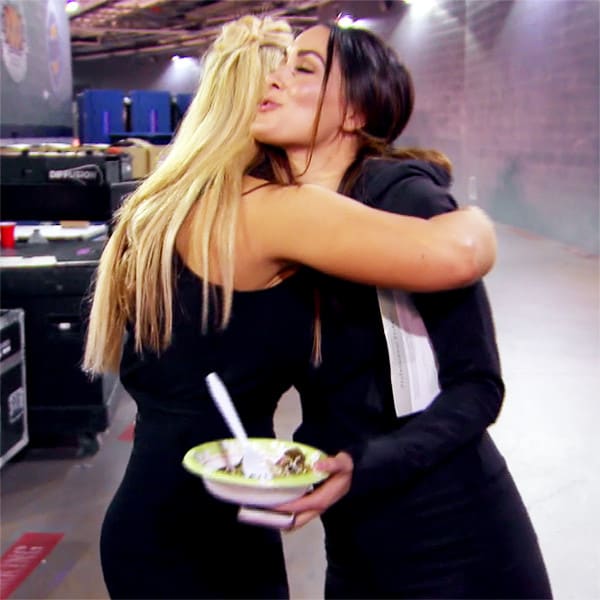 Mark Carrano calls them Divas before calling them Superstars. He gives them a pep talk and then they take a class photo.

Next, It’s finally time for the match. I don’t remember if it was any good, but I know E! will make it look like the Canadian Stampede 10-man tag. Brie makes Naomi tap. Nikki comes out to steal the spotlight.

After that, Backstage, Brie says that she doesn’t feel like that was her last match. All of the girls are excited because they thought it was a great match. They even have highlights of Lita revealing the new Women’s Title. Nikki is proud that she’ll now forever be the longest reigning Divas champion.

And that’s the episode. 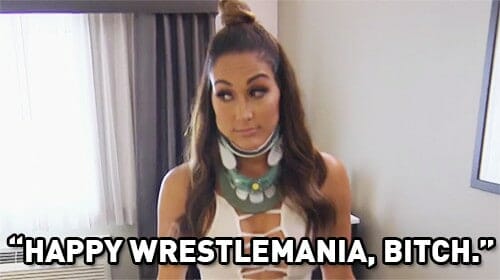 Nothing terribly wrong with it. The additions of Maryse, Lana, and Renee should make for some fun, especially since I don’t think we’ll see a ton of the Bellas. I’m just here for Rusev and the Alberto Del Rio and Paige romance.