Previously: Nothing. I guess nothing that has happened in the prior four episodes have anything to do with tonight’s episode. That’s probably not a good sign. But here’s last week’s review anyway.

Daniel Bryan and Brie Bella go to brunch. Brie wants to visit Renee and Dean Ambrose at their new Las Vegas home. They also talk about stealing art from this shop and Brie’s womb.

RUSEV!!!!! Lana’s parents and brother lives with Rusev and Lana. No wonder Rusev always want to crush things on TV. Rusev and Lana go shopping for a wedding dress. Rusev doesn’t give a fuck about American traditions. He also likes short shorts. I need a Rusev, John Cena, and Bryan reality show. These women are holding the true stars back.

Maryse gets a phone call from her mom, who informs her that a man is trying to break into the house. Maryse goes into angry french mode. She yells at her mom to call the cops. They can see the house camera from their phone, which, technology.

Paige wrestles Eva Marie. I’m sure it was a classic.

“I’m only getting married once in my life. Twice at most,” says Rusev. To Lana. Rusev wants a Bulgarian wedding to please Mama Rusev. Lana talks about Mama Rusev living vicariously through her. Rusev doesn’t know what this means.

Maryse and The Miz go to drinks with Paige. Maryse tells the story of the robber and now wants a gun. Paige is like, “No. That’s a bad idea.” Paige. Voice of reason. Miz also shuts this down. Miz and Paige say they’ll hit their finishers on any robbers, or just wait until the robber disrespects Paige so Del Rio can beat the hell out of him.

Rusev and Lana have a stripper pole in the middle of their house, because of course they do. They take the pole down for Mama Rusev’s arrival. Lana says they are having a BBQ and bringing in a chef. Mama Rusev is like, “don’t you cook?” She then sees the stripper pole. Rusev explains that it’s wall support.

Brie and Bryan visit Renee and Dean. Dean wears sunglasses inside, which isn’t too surprising. Brie says that Nikki invited herself. Renee was not prepared for this. “She looks high maintenance, but she’s not.” Biggest lie Brie has ever told. Ambrose doesn’t seem to like Nikki too much. “Negativity.” Renee has to run out and get things for Nikki. Even though she’s low maintenance. 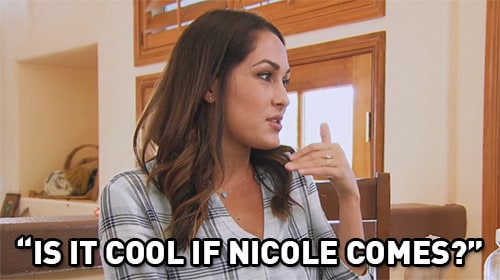 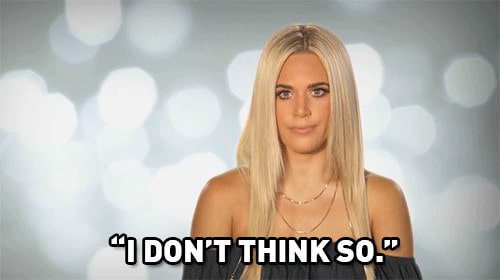 Eva shows up to protect Maryse. She’s pro-gun. Oh great. First Maryse and Eva get a dog behind Miz’ back. Now it’ll be a gun. Is this the thing? Maryse wants something, Miz says no, Maryse calls Eva to tell her she’s correct and they do what they want. It’s definitely going to be a thing.

Rusev and Lana head to a Bulgarian market. Mama Rusev talks to her son about wanting a Bulgarian wedding. Lana is smart though and understands 65% of what they are saying.

Ambrose drives the gang somewhere. They discuss whether or not The Martian and Harry Potter are based on a true story. They arrive as a desert to drive ATVs. Nikki can’t do this due to her neck. So, she hits up the bar. HOLY SHIT THERE IS A MONSTER TRUCK LIMO! I rode in a monster truck when I was a kid. It was awesome. BUT A MONSTER TRUCK LIMO! Bryan makes Nikki take pictures of them in front of the monster truck and I laughed because you know that pissed off Nikki.

Rusev talks with Lana’s dad about a Bulgarian wedding. “All you do is sit around and complain about American’s having no tradition.” This man lives the gimmick. Lana is upset that Rusev never asked her dad to marry her, which is an American tradition. Rusev just wants to talk about his biceps. I love this man.

Maryse and Eva head to the gun range. They have to take selfies to capture the moment. Even though it’s all on video. Maryse really likes shooting the gun. Eva has an assault rifle. I think that’s the scariest moment in Total Divas history.

At the Renee and Dean BBQ, Renee tries to figure out how to grill salmon. Brie notices that Renee is working too hard and not enjoying herself. Nikki informs Renee that she got a hotel room. Way to make her feel good. Renee then drops a plate. 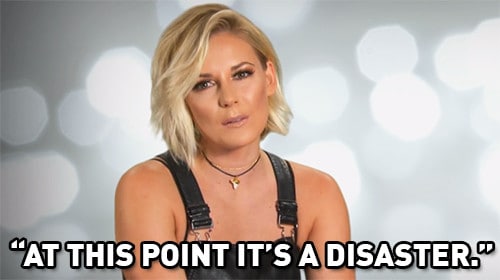 The next morning, Renee and Brie want to hang a rug. Dean is not wearing a shirt. In fact, I’m not sure he’s had a shirt on this entire episode. Brie tells Renee to chill out. This is the only acceptable female duo on the show.

Maryse reveals that she bought a gun. Yup. It’s a thing. Maryse feels empowered. Paige. PAIGE. Still thinks that she is dumb.

Renee and Brie head to Nikki’s hotel to relax by the pool. And drink. They are now relaxed.

Maryse calls Miz to inform him that she bought a gun. Miz says that he was gonna get her a gun anyway. So, all’s well that ends well.

Lana announces that they will have two weddings. A Malibu wedding and a Bulgarian wedding. I’m shocked that this was the conclusion they came to. RUSEV DANCES OUT OF THE ROOM!

Aside from the lack of Paige and Del Rio, this was a fine episode. Rusev was STRONG in his official debut, Ambrose wasn’t bad but needs to put a shirt on, Miz was fine, and Bryan had a couple of good moments and lines. The Divas were just there.