I’ve always been a fan of the versus series. Going back to when I was a dumb kid and played X-Men vs. Street Fighter at my local arcade. I actually managed to beat it with a team of Rogue and Storm on my first try.  The series has grown since then, adding new characters and mechanics over the years. The last numbered game released in early 2011 with Marvel vs Capcom 3.  Later in the year, Capcom released Ultimate Marvel vs Capcom 3 adding even more characters and modes. Six years later, the game has finally come to PC. 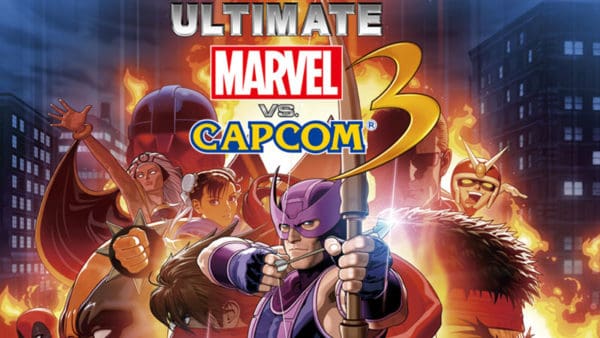 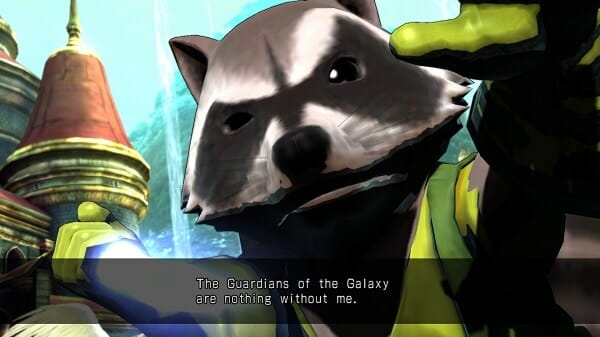 UMvC3 on PC retains the same fast gameplay of its console brethren. If your PC is good enough, it can look better than the console versions too. From the moment I booted it up, the game was at a steady 60 FPS. The only occasional dip happens in the menu transition, for some odd reason. I experienced no drops in speed or frames at all actually playing the Fighting game.  While you could argue that this is a six year old game that shouldn’t discount this fact entirely. Many PC ports over the past few years have been busted completely. So, it is really commendable that Capcom got this game right. 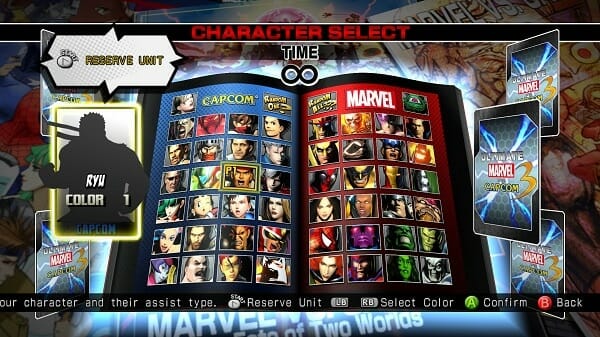 UMvC3 is a 3 on 3 fighting game, with rosters of Marvel and Capcom characters. Honestly, the rosters aren’t quite as memorable as in MvC2. However, UMvC3 has returning favorites such as: Ryu, Sentinel, Morrigan, Iron Man, Chun-Li and Wolverine. There are also new characters including: Doctor Strange, Mike Haggar, MODOK, Viewtiful Joe and more. This game has 36 characters total. A small step down from MvC2’s lineup of 52. Although, is still more than most other fighting games on the market today.

Capcom retooled the controls for UMvC3 and it does take some getting used to.  Instead of the traditional 4 or 6 attack buttons (light/heavy punches and kicks), UMvC3 is primarily a three button game, with low, medium and heavy attack.  There is also a fourth button for air-launches, but that is the only purpose of it.  You can also call in your partners like in prior games with two assist buttons, which also swaps out your character if you hold it for a few seconds.  You can still pull of Hadokens and Hurricane Kicks, you just use the same buttons for them, with the only variation being speed or power. 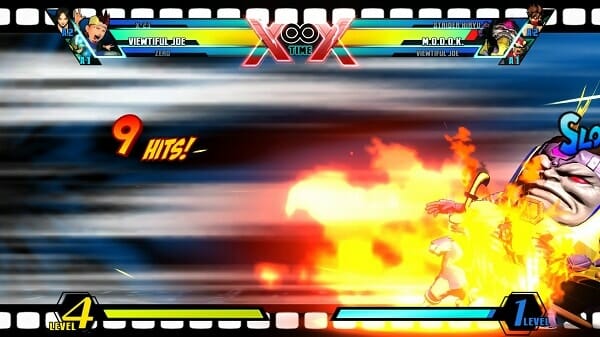 There are also some new combat moves added to Ultimate Marvel vs Capcom 3. Namely, the X-Factor and the air crossover attack.  The X-Factor is a form of a boost move that you can use at any time, but you only get one per match.  It increases the speed and strength of your character, while also restoring the red health of your life bar and reducing overall damage. However, it only lasts for a short time, but the duration gets extended with the fewer characters you have.  Meaning, if you use it when you have all three characters remaining, it lasts for 10 seconds. But, if you use it with two characters it lasts for 15. Then, if you use it with your last character, it lasts for 20 seconds.  It’s akin to a “Hail Mary” type of play. If you are getting beaten badly and want to try and even the score.

The air crossover attack involves the new launcher button.  The gist is that you want to launch an opponent, jump after them, and hit them a few times. Then, pick a direction and press the launch button again.  This causes another of your fighters to tag in and keep the combo going. This allows you to repeat the process with your third fighter, if the combo is unbroken.  This requires one super meter bar per call in. The timing and direction can be tricky, but you’ll get used to it with practice. 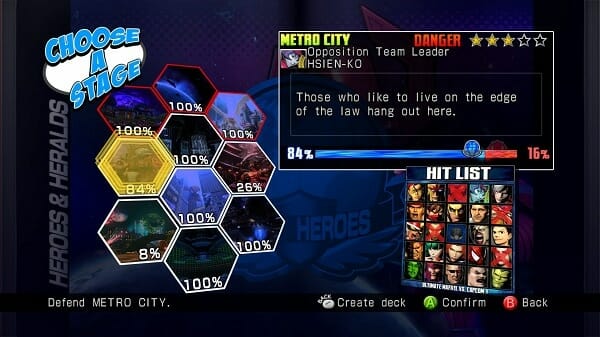 The story mode is six fights against random teams, as you progress up an imaginary ladder.  After the sixth fight, Galactus shows up. First, he spawns a silver lackey to fight you. Then, another one, and eventually he fights you himself in a screen filling appearance.  He’s not as difficult as Cyber-Akuma in MvsSF, but he can be challenging at times because of his high level of damage output.  Once you beat him, you get a short ending with whatever character delivered the finishing blow.  It’s not the deepest story mode in a fighting game, but compared to MvsC2, where it was just a “Thanks for Playing,” something is better than nothing.

As for other modes, there’s the prerequisite training and missions modes. However, they aren’t anything special.  The last mode is pretty interesting and it is titled “Heroes & Heralds”.  This lets you select either a hero side or villain side. While you either try to save the planet from Galactus, or help him destroy it.  You have to go to various areas and fight against other characters to wrest control of the area for your side. 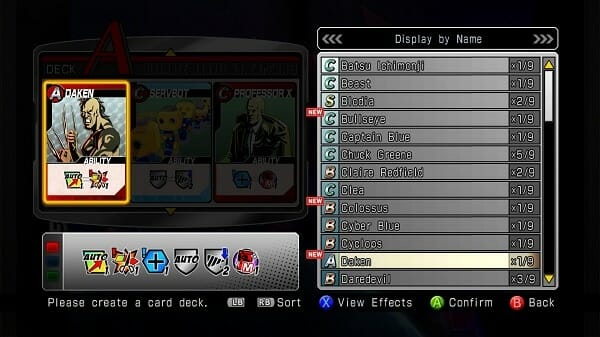 Along the way, you’ll acquire cards from the teams you fight against.  These cards have active or passive abilities. like increasing your hyper gauge automatically (passive), or stunning your opponent whenever you use your X-Factor (active).  Cards have a rarity scale with more rare cards having better abilities.

Honestly, it’s nothing more than a glorified mission mode. But, it is still a fun diversion. It would have been nice if you could use Player Points, which you gain for battling in the game, to actually buy cards. Perhaps, if there was more planning in what areas to go after, or different events during the fights.

The thing that makes or breaks the game for most people, is the online multiplayer.  When I tried a few matches, it was a tad laggy in spots, but entirely playable.  I’m sure other people will have different experiences, but for me it was solid.

Overall Thoughts:  9 out of 10:  Frankly, it’s a minor miracle this game is even on Steam. Especially, given how apathetic Capcom has been in the past.  Not only is it on the PC platform, but it actually works well. True, it is a no-frills port, no new characters or modes or anything. However, it is still done extremely well. For a platform with not a ton of fighting games on it, this is an easy buy.

* For the sake of transparency, the publisher provided a digital code for review purposes *