Melding genres has been a thing in video games for a long time. When it works it leads to some amazing titles. It also leads to some really creative ideas being put forth for players to experience. This is also the case for Venezuelan developers Paper Castle Games title Underhero. Taking the core of a 2D platformer with graphics from the Super Nintendo and an RPG combat system similar to Paper Mario and some comedy a la Undertale. The result is a concoction that delivers superbly in almost every facet. It just has some gameplay elements that drag out the experience in an unnecessary way. 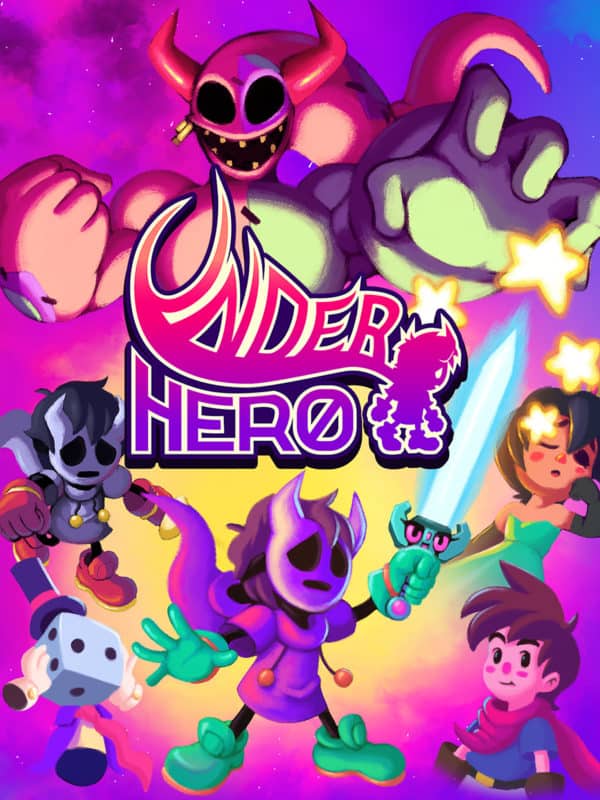 Rise of the Underling

Many games exist where you play as the villain, very few have you control a random low-level character. What I appreciate most about Underhero is that in its opening moments you immediately get a sense of what you are playing. The hero has made it to the final area, he’s ready to rescue the princess and put the essence of evil, Mr. Stitches in the ground. However, the final set of minions remain and all but one are resigned to their ultimate fate. This solitary underling takes it upon himself to save his skin and bring down a mammoth light fixture on the hero and his co-workers.

Although the hero has passed, all hope is not lost because the hero’s weapon named Elizabeth IV still lives and charges this nobody with protecting it. In jubilation, the main villain releases the princess and entrusts you with the Triviality stones. These stones belong to each of the three world’s major bosses and since there’s no longer anyone to fear, the sudden silent protagonist must deliver them back to their owners.

Unbeknownst to the evil overlord, Elizabeth IV is actually teaching our masked fellow how to do heroic feats. Beginning with the various ways you can demolish, outwit, and even converse with your unaware associates.

The Fight of His Life

Underhero features a pseudo real-time battle system with some fun and interesting mechanics. Elizabeth IV can actually change into various weapons that are meant for disposing of different types of enemies. Quick characters are best dealt with using a sword. While flying enemies must meet the end of a slingshot. There’s also a hammer that deals a whammy of damage. This all happens at the cost of stamina. So the battle system winds up in constant push and pulls between dodging, jumping, and attacking.

At the start, it is easy to figure out when to jump or dodge. However, as you progress the enemies get tougher and their warning signs aren’t as simple to see. Not to mention, getting a decision wrong or not judging stamina leaves you open for attack due to the hero getting tired. In addition, there’s an extra layer to the combat you can use to your advantage. A shield is available that if used perfectly creates a parry that does damage and helps stamina. Holding down the attack button does extra damage on attacks, but it also uses more stamina. Plus, you can also time attacks to the beat and deal additional damage. There’s also a rush mode special attack combo if you buildup stamina too.

As a whole, the combat works rather fluidly and although there is a lack of enemy variety in each world, they are visible on the screen and totally avoidable via a bribe system. Seeing as these baddies are still your comrades you can converse with them for tips, tricks, and even secrets, or use coins to bribe them out of battling. However, you do get HP bonuses and potions from participating in combat. So, there are also disadvantages to sticking to your villainous roots as well.

After gaining a certain amount of experience you gain a level. Each level gain results in an upgrade choice for our dear hero, raise up HP, attack power, or stamina. Although raising stamina at least 2 or 3 to 1 to the others is really the way to go. Stamina is the lifeblood of this combat system. Without it, you cannot do anything. So you can’t go wrong with leveling up there more often. Although you shouldn’t forget about HP and attack power too.

Thankfully, there are also some off-the-wall mini-games, like ice skating or running through a volcano. Furthermore, hilarious quiz shows also break up the grind and jumping around. Most of them are actually pretty fun, but the controls for some of the mini-games aren’t the best. I don’t want to spoil them all so I won’t expand much further on them, but I was surprised at how much variety is included in the mini-games.

Platforming Gets Too Much

The other major component of Underhero is its platforming. You’ll transition through each world by jumping, running, and even gliding. The hero can use his hoodie to glide to hard to reach platforms or if free-falling to get random coins. Exploration in the Chestnut Kingdom is both rewarded and required in completing the entirety of each world. There are the usual items hidden around various areas, coins, and soundtrack cassettes that let you change the music you hear in save stations. The platforming itself feels good and there are many obstacles presented in your way to make things challenging.

My major issue with the platforming, especially once you get into Worlds 2 and 3, is the sheer amount involved. Many of the quests are fetch quests that require finding keys, switches or an item. This is made even worse by the lack of a continuous map. Underhero does have several standing map stations per world, but it usually results in easily getting lost. Sometimes it got to the point where I just would stop playing for a while and then come back to the game later. This is not always a bad thing perse, it just became frustrating at times. I’m not saying there should be waypoints or anything like that. Just having a map that follows your character available at all times would be helpful.

This platforming is also present in the boss battles too. Some of this is fun and unique when combined with the rhythm-based combat in these fights. However, they also get super cumbersome by the end and wind up more annoying than enjoyable.

Everything is Groovy Man

What’s striking immediately is Underhero‘s writing. It does not take itself seriously at all and pokes fun at video game tropes along the way. The banter between other villains in the cafeteria is silly yet endearing. While even the save station operator longs for some other job. Mr. Stitches himself made me laugh out loud in various moments and the other bosses have some good lines too. Between all of the characters available, there’s a tremendous amount of text in this game and it is a credit to the writing team they could keep up the humor going throughout the 20-hour adventure.

Furthermore, the music in Underhero is a stand out. Composed by Stijn Van Wakeren, it contains some bop inducing tracks like its hero theme and race theme. Each boss theme, in particular, is just a wave of electronic rhythms and has you grooving along when deep in a fight. While other melodic tracks just give a great vibe when exploring areas and jumping on platforms and avoiding pitfalls. This is consistent all throughout Underhero and makes for a nice soundtrack to listen to outside of the game as well. There are a lot of huge games coming out in 2020 and I’m sure they’ll all have fantastic soundtracks. However, I’d expect Underhero to still rank pretty high as one of the best.

This game was reviewed using a digital code provided by the publisher (Digerati).

Whether it is the hilarious writing and bopping soundtrack, or the charming characters and art style or even The varied and nuanced battle system, which allows for a different experience in each fight. It’s easy to find so much to love about Underhero. The ending seems to indicate more to come for our masked fellow, hopefully, this means a tighter grip on platforming and a map in the next installment. Although technically Underhero has been out for almost two years on PC, it barely hit consoles in February 2020. I certainly implore anyone looking for something to play right now to give it a shot.