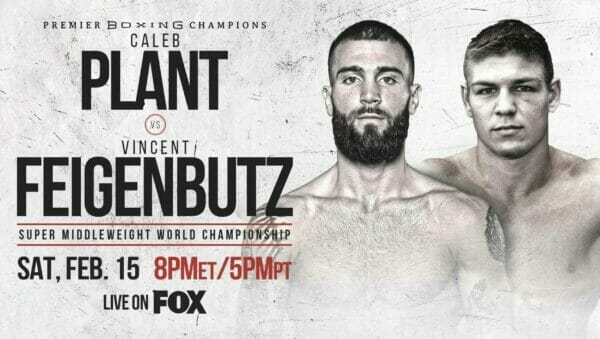 Caleb Plant vs Vincent Feignbutz was a boxing match between IBF super middleweight Champion Caleb Plant and #3 ranked IBF super middleweight and mandatory challenger Vincent Feigenbutz. This took place on February 15, 2020. The fight was scheduled as the main event for PBC on Fox, and was Plant’s first fight in his native Nashville. Feigenbutz was seen as yet another easy opponent for Plant, with The Athletic stating it would be “hard to envision Plant having much trouble defusing Feigenbutz’s offense and then finding a rhythm and turning the bout into target practice”. Plant came into the bout as an overwhelming favorite.

Canelo Álvarez vs. Caleb Plant: On the Road to Undisputed is an upcoming super middleweight unification professional boxing match. Canelo Alvarez is the current WBA (Super), WBC, WBO and The Ring champion. The winner set to become the first undisputed super middleweight champion in boxing history.

To see more of Canelo Alvarez on the way to this historic match listen to our alternative commentaries for Canelo vs Saunders and Canelo vs Smith!

Check out our Caleb Plant vs Vincent Feigenbutz Alternative Commentary