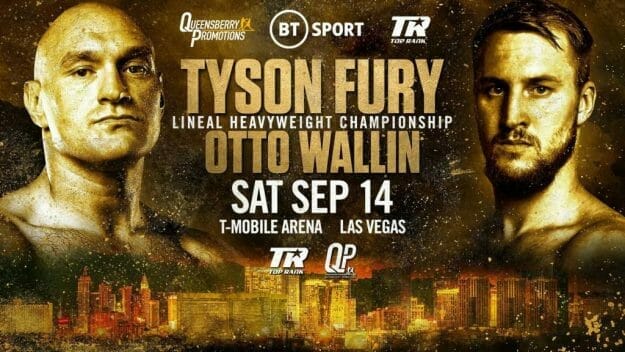 Robert Winfree and Mark Radulich provide our Tyson Fury vs Otto Wallin Alternative Commentary! Tyson Fury fought again in Las Vegas against former WBA Continental heavyweight champion Otto Wallin (20–0, 13 KOs) on 14 September, at the T-Mobile Arena. Promoter Frank Warren said: “It is another undefeated boxer he is facing and a contest where a victory will set up the Deontay Wilder rematch.” Fury scaled at 254.4 pounds (115.4 kg), his lightest since facing Klitschko in 2015, when he weighed 247 pounds (112 kg). The Swedish southpaw Wallin came in at exactly 236 pounds (107 kg).

Check out our Tyson Fury vs Otto Wallin Alternative Commentary