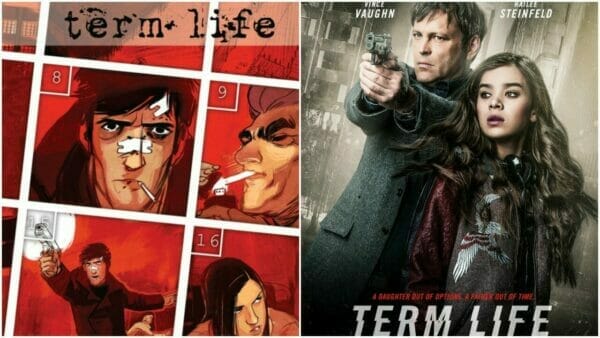 Term Life (2016) is an American action drama film based on the graphic novel of the same name. It is directed by Peter Billingsley from a screenplay by A.J. Lieberman. The film stars Vince Vaughn, who also produces the film, Hailee Steinfeld, Jonathan Banks, Mike Epps, Jordi Molla, Shea Whigham, William Levy, Taraji P. Henson, Annabeth Gish, and Terrence Howard. The film was released on April 29, 2016, in a limited release and through video on demand by Focus World. The film received negative reviews.

It was the final film role appearance of Brent Briscoe, who died on October 18, 2017.

We have also discussed other direct comic/graphic novel adaptations such as The Kitchen, Ghost World and I Am Not Okay With this!

A daughter out of options. A father out of time. Comic Stripped Term Life Comic and Movie Comparison