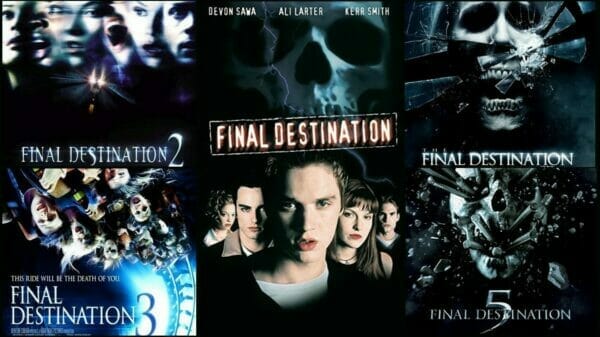 Robert Winfree and Jason Teasley join the show to talk the Final Destination franchise. It’s the Halloween season so here’s our Final Destination Film Franchise Review. However, since Mark Radulich is a big sissy pants we’re tackling a slasher franchise where the monster is never seen and basically the kills all look like preposterous accidents. It’ll be a load of fun folks!

Final Destination is an American horror franchise consisting of five films, two comic books, and nine novels. It is based on an unproduced spec script by Jeffrey Reddick, originally written for The X-Files television series, and was distributed by New Line Cinema. All of its five films are set around a small group of people who escape impending death when one individual (the protagonist) sees a sudden premonition, who warns them they will all die in a terrible mass-casualty accident. After avoiding their foretold deaths, the survivors are killed one by one in bizarre accidents caused by an unseen force creating complicated chains of cause and effect, resembling Rube Goldberg machines, and then read omens sent by another unseen entity in order to again avert their deaths.

The series is noteworthy among other horror films for its use of an antagonist that is not a stereotypical slasher or other physical being, but Death manifested, subtly manipulating circumstances in the environment with a design on claiming anyone who escapes their fated demise.

Check out our other horror movie and movie franchise reviews like, Malignant, Crawl and Hellraiser!

Check out our other Long Road To Ruin shows such as The Purge, Candyman and also Fear Street!