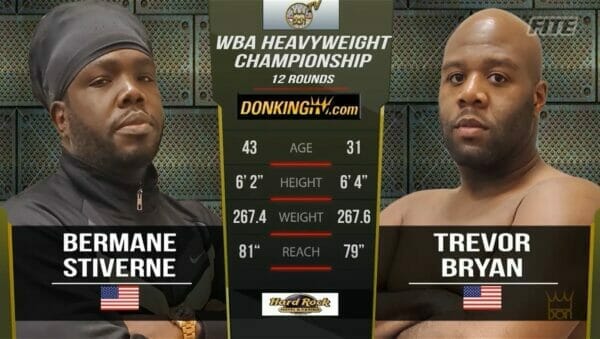 Bryan was due to fight Mahmoud Charr on January 29, 2021 for his WBA (Regular) heavyweight title; however, Charr could not travel to fight as he did not have a valid United States visa. Due to this, Bryan instead fought former WBC champion Bermane Stiverne for the vacant title, which had been stripped from Charr due to being inactive for too long. Trevor Bryan vs Bermane Stiverne took place on January 29, 2021 at the Seminole Hard Rock Hotel & Casino, Hollywood, Florida!

To hear more of our boxing alternative commentaries check out Shakur Stevenson vs Joet Gonzalez, Devin Haney vs Jorge Linares and Demetrius Andrade vs Luke Keeler!

Check out our Trevor Bryan vs Bermane Stiverne Alternative Commentary